Previous Page of9 Next

Previous Page of9 Next
May We Recommend 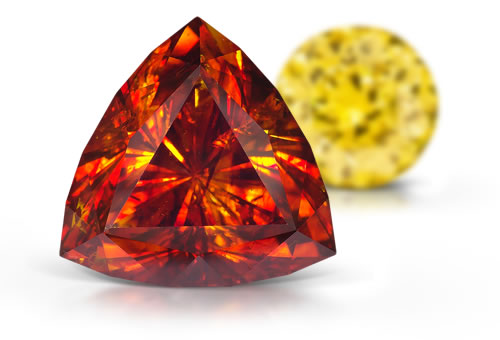 With greater dispersion than diamond, sphalerite is an intriguing, yet challenging, gem. Known primarily to collectors for its lack of hardness, sphalerite can try the patience of even the most highly skilled lapidaries who dare to fashion it into a finished gem. Not only is it extremely soft, it also has perfect cleavage in six directions, making it extremely difficult to cut and polish! Add in the fact that it's a brittle gem, and you have an idea of the challenge that awaits its potential cutter. When a talented lapidary can complete the task of fashioning a gem, the results are more than worth the lapidary's efforts!

A rare treasure for gemstone collectors, sphalerite (pronounced SFAY-luh-ryte) has a fire and brilliance that is unforgettable. Sphalerite has a greater dispersion than diamond. Dispersion refers to the rainbow colors we see in some gemstones. Dispersion is the property responsible for the separation of visible white light into its spectral colors. Fine, well cut and faceted sphalarite has an adamantine, or "diamond like" luster. Luster is how shiny or reflective a gemstone is.

Known primarily to collectors due to its lack of hardness (3.5-4 on the Mohs scale), sphalerite can be a challenging material to fashion into gems. Not only is it extremely soft, it also has perfect cleavage in six directions, making it even difficult to cut and polish. Add in the fact that it's a brittle gem, and there is a challenge awaiting lapidaries. Yet, when a talented lapidary is able to complete his task with a fashioned gem, the results are spectacular.

Found in a Variety of Forms

This gemstone is named from the Greek "sphaleros", meaning treacherous. Because sphalerite resembles several minerals in appearance, including galena, it presents difficulty to miners when trying to identify it in the field. Mother Nature wasnt shy as she was mixing sphalerites formula. It is a zinc oxide that contains varying amounts of iron. Crystal formation varies and twinned crystals are common. Found in a variety of forms, sphalerite is often called zinc blende, as it is a major worldwide source of zinc ore.

Sphalerite colors include a full spectrum from yellow to red and its often seen in various shades from yellow to green, and ending in black. As the iron content of the gemstone increases, the stones become darker. Red to brownish red crystals are sometimes called ruby zinc, or ruby blende, and black crystals are called black jacks. Depending on its origin, some sphalerite may fluoresce from orange to red under ultraviolet light.

Additionally, sphalerite has a couple of interesting properties. It is both pyroelectric (becomes electrically charged when heated) and triboluminescent (begins to glow when rubbed, pressed or struck). Sphalerites luster varies quite a bit, depending on its crystal habit and chemical nature. With a gem quality specimen, you can rotate it and see a magnitude of bright flashes, with hundreds of sparkling facets.

While the majority of colored gems in the industry are color enhanced, sphalerite still remains natural color today. While sphalerite is found in several locations worldwide, only a few locales provide material that is gem quality. Spain and Mexico are the two most notable sources for fine quality material, while lesser deposits have been found in Canada, Germany and the United States.