Get a head start on holiday shopping! Enjoy extended returns through January 31st!
Skip To Content

A polariscope is one of a series of tools that facilitates the process of gemstone and mineral identification. It is used in conjunction with other gemological tools to narrow the range of possibilities. The primary purpose of a polariscope is the determination of optic character. Gemstones (and minerals) commonly exhibit different structural forms. Some may be singly refractive, doubly refractive, or an aggregate of numerous microscopically small crystals. Each of these structures responds differently when viewed through a polariscope. This difference is referred to as the optic character.

A handheld polariscope is lightweight, durable, and can be used at home, in the office, or on the road in your search of quality gemstones.

The Science Behind Your GemVue™ Polariscope

Each polariscope contains two polarizing filters. The topmost is called an analyzer, and the lower a polarizer. The analyzer has a reeded edge similar to that found on a coin. It may be rotated to the left or right. The polarizer, or lower filter, is stationary and can be found at the opposite end of the polariscope frame.

For convenience of use, a smaller circular module with a glass bottom, called the gem stage, is provided. The gem stage serves as a holder for any gemstone being tested. The narrower portion of the gem stage slides into the base of the polariscope frame and is positioned above the polarizer. The gem stage can be easily rotated left or right with your free hand.

If the analyzer (top filter) is aligned properly with the polarizer (bottom filter), it can totally block or permit the passage of light. When both filters are in the dark position (no light visible), it is referred to as crossed polars. When rotated 360°, the filters will go light and dark two times. Rotating the analyzer 180° brings it back to its original dark or light position.

Step one: Take your sample (gemstone or mineral), clean it with a cloth, and place it in the gem stage. Using tweezers will facilitate the placement of your sample. Set the gem stage aside for the moment. 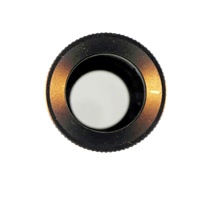 1) The sample appears light through the entire rotation. It is an aggregate (AGG).

2) The sample appears dark throughout the entire rotation. It is singly refractive (SR)

3) The sample blinks light and dark. The sample may be doubly refractive (DR) or SR ADR.

4) The sample may exhibit irregular blinking that appears as snake-like bands or crosshatching. The stone is probably SR with anomalous double refraction (ADR), but may be doubly refractive.

The first two responses require no further tests. Responses 3 and 4 require a confirmation test to determine the true optic character of the sample.

Step two: Turn the gem stage until the stone appears be at its lightest point. Be sure the filters remain in the dark position.

Step three: Quickly rotate the analyzer to the light position. The gem stage remains stationary. Observe the lightest area of the stone and see if there is any change. There are two possibilities: