What do you think of when you hear the phrase "phenomenal gems"? In gemological circles, the term "phenomenal" holds a very special meaning because minerals or gemstones classified this way exhibit special optical characteristics--or "phenomena".

Phenomena refer to unusual optical effects identified by moving a strong concentrated light, also known as a penlight, back and forth over a gemstone. Simply stated, this means you will usually see a special effect when light interacts with a gem. Very often, the phenomena are caused by the interaction of light with inclusions in a gem.

The star effect in star sapphire is called an asterism and is a well-known example of a phenomenon. Sapphire has long needle shaped inclusions that intersect. If the gemstone is cut as a cabochon, these crosses of needles are in the center of the gem. When light is shined on the intersecting needles, we see a reflection of a star.

A star may have four, six, or 12 legs (rays) radiating outward from a central point. They will also follow the light source as it travels over the surface of the stone. To fully exhibit this effect, gemstones or minerals need to be fashioned in a special way. All materials that exhibit asterism are cut en cabochon, a style that has a dome-like appearance on top. While many minerals and gemstones exhibit stars, some are extremely rare and highly prized by collectors and jewelry designers.

Some gemstones may exhibit an optical effect called chatoyancy. A chatoyant gemstone, if properly fashioned, will display a single sharp, bright line of reflected light caused by fine needle-like or fibrous inclusions within the gem. This effect is best seen when the material is cut as cabochons. The word chatoyant is derived from a French phrase that means "eye of a cat". All cats have one trait in common-a characteristic slit that runs through the center of the eye; hence the more well-known term "cat's eye". It should be noted that the term cat's eye always refers to the mineral chrysoberyl. Any other mineral or gemstone exhibiting this effect must be designated, such as cat's-eye tourmaline or cat's-eye quartz.

How do stars and cat's-eyes occur? They are created due to a special arrangement of inclusions. As incoming light strikes the surface of the host material, it comes into contact with and reflects off a series of fine fibers or needles. To create the effect, the needles need to be arranged parallel to one another. In the case of stars, the layers of parallel needles or fibers are arranged at definite angles throughout the material. Both stars and cat’s eyes are evaluated by the strength and sharpness of the effect. 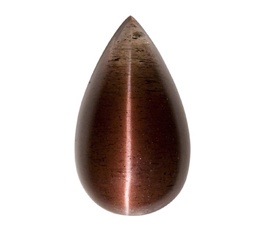 There are two more unusual characteristics that may be observed in some cat's-eye materials. The first is known as the milk-and-honey effect. This is most commonly seen in chrysoberyl. When a light source is directed through the side of a stone, one half appears milky or creamy while the other half remains clear and unaffected. Reverse sides, and the effect remains the same, only the clear side is now milky and the milky side is clear. 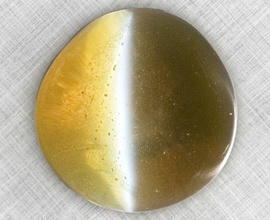 Another very important phenomenon is color change. You may occasionally hear the more technical term photochroism ("photo" meaning light and "chroism" meaning color) used to describe the effect. The most famous color-change gemstone is alexandrite, a member of the chrysoberyl species. When exposed to daylight and then incandescent light, it will change colors. The most highly prized material changes from a bluish green to a reddish color. The more intense the change, the more valuable the material becomes.

Color change, while highly prized by collectors, is not present in many mineral species. In some cases, such as tourmaline, the phenomenon is extremely rare. While alexandrite and some of the more exotic color-change minerals can be quite costly, there are less expensive alternatives, such as color-change garnet or sapphire.

You might wonder where phenomenal gems and minerals fit into the overall scheme of the classification system. To identify minerals more clearly, the first major category is a group. A group consists of a broad series of similar species. Species are subsequently divided into subcategories called varieties, which are further defined by either color or phenomenon. An example would be ruby (color) and star ruby (phenomenon), both of which are varieties of the mineral species corundum. Mineralogists acknowledge many more groups than gemologists.

Phenomenal gems and minerals, while not as well known to the general public, are an exciting and exotic creation of nature. Most collectors would consider their collection deficient if they did not include at least a few stars, cat's-eyes and color-change stones. Whether you are a new collector or old, designer or jewelry aficionado, be sure to take advantage of Mother Nature's most amazing creations. They are truly phenomenal gems. 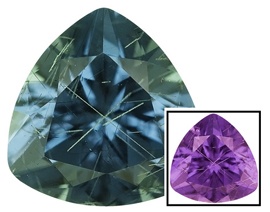