Treasured by all cultures and religions, gemstones have captured the imagination of humans for thousands of years. During that time, gemstones have been credited with powers of protection, healing, wisdom--even invisibility and life. But where do gemstones come from?

Most gemstones are made from the crystalline forms of different minerals (except for non-mineral, organic gems like pearls, coral, and amber). Minerals form through naturally occurring processes that combine chemicals, heat, and/or pressure. The concentrations of chemicals determine the structure and color of the crystals. The temperatures and pressures that the crystals form under affect their size and shape. Most mineral crystals are tiny, but a few grow large and fine enough to be cut into gemstones of rare beauty. Those gemstones are the crowning glory of the mineral world.

While we don't consciously think about them, minerals play an important role in our everyday lives. They form the rocks in the earth's crust, they fill our homes, our highways, and are important components in all our technology.

Mineral crystals form during one of three rock-making processes and, therefore, fall into one of three categories: igneous rocks, metamorphic rocks, and sedimentary rocks.

There are two types of igneous rock; intrusive and extrusive. Intrusive igneous rocks never reach the surface and are only exposed due to weathering or tectonic movement. They are often dome/bowl shaped or look like a pipe. The dome and bowl shaped formations are due to the magma pushing through rock, much like the way the lava in lava lamps moves to the top of the lamp, and reaching an area of resistance that it then pools in. The pipe shaped igneous formations occur when magma moves along weaknesses within the crust before reaching either the surface or an area of rock that it cannot easily move through. It then either stops and cools or it pools up to create one of the dome/bowl shaped formations. As the igneous formations cool crystals form. Intrusive rocks are often course grained because they cool slowly allowing crystals to grow larger. Extrusive igneous rock reaches the surface, sometimes quite violently. Once at the surface, they cool quickly. This often creates pockets of trapped gas or cavities called vesicles, within the rock. Examples of gemstones formed in igneous rocks include tourmaline, aquamarine, topaz, kunzite, and feldspars like sunstone and amazonite. Many other gemstones can be found within igneous rock formations but they are not a direct result of the formation of igneous rocks. They are called secondary deposits because they form after the primary deposit. Many form because of hydrothermal processes introducing extremely hot water into the cavities within existing rocks. The water is able to transport chemicals into the cavities or vesicles that then form minerals. Examples of gemstones that are found within igneous rocks as a secondary deposit include amethyst, larimar, and fire opal.

Metamorphic rocks form when existing rocks are subjected to intense pressure and/or temperature increases that lead to the alteration of the rocks mineralogical composition, texture, and structure. Metamorphic rocks often go through a process called recrystallization. Recrystallization occurs when the temperature and pressure becomes great enough to break atomic bonds within bodies of rock and change their structure without changing their basic composition. This is much like the way that you mix ingredients together to make a pie. The eggs, milk, and filling look different when they are not mixed within the bowl, but once mixed and cooked in the oven, the composition of the pie has not changed but the state of its ingredients has.

Metamorphic rocks can form in regional or contact metamorphic processes. Regional metamorphic rocks often form deep within the earth due to the extreme temperatures close to the mantle and the intense pressure of the overlying rocks. They can also form through large scale tectonic movements like mountain building events. Contact metamorphism occurs due to contact with molten rock. Between the original country rock and the igneous rock is a metamorphosed zone that can show all degrees of metamorphism. Metamorphic rocks close to the igneous intrusion may have altered chemical compositions due to the introduction of hydrothermal fluids that were given off of the igneous rock as it cooled. These hydrothermal fluids can replace or partially replace the existing chemicals within the metamorphic rock. This is called metasomatism. Farther from the heat, the degree of metamorphism decreases. Examples of metamorphic gemstones include tanzanite, garnet, ruby, sapphire, emerald, spinel, and kyanite.

Sedimentary rocks are formed by processes that occur at Earths surface. They can be made of other sedimentary rocks, igneous rocks and metamorphic rocks. Some sedimentary rocks are deposited chemically from a solution. Others are biochemical or organic in origin and are made of the calcium carbonate from the shells of bygone organisms or are made from the breakdown of organic tissues of plants and animals. Most sedimentary rocks are made of the fragments of eroded rocks that are cemented together. When rocks of all kinds are exposed to the surface they undergo an erosion process called weathering. Weathering is the physical breaking apart of a rock due to physical forces like wind, rushing water, or expanding ice. These rock fragments are often washed into rivers and/or into the ocean. Over time, layers of rock fragments, mud, and other organic and inorganic elements are compacted together into hard rock. Examples of sedimentary rocks include limestone, shale, and sandstone. Examples of gemstone materials that are sedimentary in origin are jet, aragonite and calcite. Surprisingly, most gemstones are found in sedimentary deposits after they have been weathered out of their original parent rock. These gem materials, discovered in river sediments, called alluvial deposits, include gems such as diamond, spinel, sapphire, and ruby.

In each of the above cases, atoms form complex yet ordered structures that we call crystals. The structure and the mineral's chemical composition combined form the crystal's properties, such as shape, hardness, cleavage, refractive index, and more. This is why a gemstones origins are so important. The way they form and under what environmental factors heavily influences their physical and chemical properties. Giving us yet another reason to treasure our incredible gemstones. 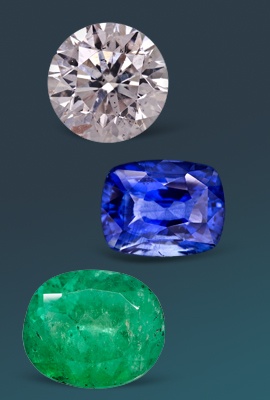