Have you ever been confused over the usage of gemological terms? Well, you are not alone. Gemological and mineralogical terms are often misunderstood, even within the gemstone and jewelry industries.

Let us place gemstones into two basic categories: natural and lab created. Natural gemstones are created by nature without any intervention by man. Natural diamond, sapphire, and amethyst are examples of natural gemstones. The term natural is confusing because it can refer to the process by which a gem forms, but also to the color of a gemstone. In this article, we are only addressing natural formation, not natural versus treated gemstone color.

Lab created is a broad category that includes all man-made or synthetic gemstones. Lab created gems do not form in nature but rather in a laboratory.

How about a better understanding of the terms used to describe gems that are included in the lab created category?

Note: These are Jewelry Television definitions. The industry may have slightly different definitions for these terms. Keep in mind that these terms often overlap in their definitions.

Glass
Glass can imitate most any gem material, often in surprising ways. The formulas for glass vary infinitely, thus the variety we see in household and industrial applications. The gem applications vary just as much, with different translucency, color, inclusions and optical properties being created through various known and proprietary formulas. While these can be beautiful, they differ from most gemstones in that they are not crystalline.

Ceramics
A ceramic is different from pottery or porcelain, as its name implies. It is a wide-ranging category of materials that are bonded through a process of chemistry and heat. Rather convincing imitations can be created of many opaque gem materials, such as turquoise, coral, malachite and lapis. Most ceramics are readily identified with magnification, as nothing can perfectly imitate natural gem materials. Ancient Egyptians created an imitation turquoise that could be classified as an early ceramic, so the idea has been around a long time.

Flame Fusion (Verneuil)
The first true synthetic gemstones were grown by this method in the late 1800s. By the early 1900s, methods were perfected and published by a French scientist named Auguste Verneuil. Ruby gemstones grown by the flame fusion method are also referred to as Verneuil ruby after its originator. Since rubies have always been in demand, but generally in short supply, this gem was an obvious starting point for synthesis. Flame-fusion spinel and sapphires soon followed. A comparatively simple method by today’s standards, the flame fusion process slowly sprinkles the powdered ingredients through a flame of the proper temperature to melt the powders. These melted powders then fall onto a surface, cool and crystallize. The constant flow builds up a sizable crystal called a boule. Today, synthetic ruby, sapphire and spinel of all colors continue to be grown by this process. They typically have good clarity and idealized colors almost too perfect to believe. They are also grown in many colors not seen in nature.

Flux-Grown
The flux-growth method was developed in 1935 in Germany and perfected by Carroll Chatham in the 1960s to grow emerald crystals. This method recreated, under laboratory conditions, a similar environment and ingredients in which natural gems form in the earth. Within a crucible and under carefully controlled heat, the raw ingredients for a gemstone are dissolved in fluxes and then allowed to slowly recrystallize. The gems created by this process would often exhibit natural-looking inclusions. Research and education quickly began to develop ways of identifying the characteristic inclusions in order to separate them from natural gemstones. This process is more time consuming and costly than the flame-fusion method to produce, and synthetic gems grown in this manner are more expensive. Stones grown by this method are some synthetic spinels, rubies, sapphires and emeralds. All of these materials can also be grown by other methods.

Hydrothermal
The hydrothermal process, much like the flux-growth process, is a slower and more costly method of growing crystals. It is done in an autoclave, which is a very strong, heavy container that allows the growth to develop under controlled heat and pressure. Certain gems grow well under these conditions; others grow better by flux melt, not requiring the pressure of the hydrothermal process. As the hydro implies, the crystals form within a fluid rather than in a flux. The inclusions and characteristics can be very similar to those seen in natural gemstones. In the absence of any identifying inclusions, high-tech methods of separation are required. Stones grown by this method are synthetic quartzes, some synthetic emeralds and true synthetic alexandrites (some alexandrite-like materials are actually imitations rather than synthetics with the same chemistry and structure).

Skull Melt
Cubic zirconia is the only gemstone material produced by this process, as it needs the highest temperatures in which to form. Cubic zirconia as we know it was patented in 1972 and appeared widely in the market several years later. It was a complicated product to create, as the required temperatures are so high that no metal container can withstand them. So an outer, cooled layer of the cubic zirconia material itself forms its own self-crucible. Radio frequency-generated heat melts the central material while the outer edges are water-cooled. The outer cooled layers appear whitish, hence the name skull. Another aspect of growing cubic zirconia is that pure zirconium oxide does not want to crystallize in the cubic form, which best imitates diamond, so stabilizers, usually Yttrium, are added to the formula. This can produce crystals of various sizes, when properly controlled.

Czochralski Pull and Zone Melt
In some ways, these methods are improvements of the flame-fusion growth method, in that they start with a raw powder that is melted and cooled into a large, single crystal in a controlled way. In zone melt, the powders are pressed together tightly into a long tube then exposed to carefully timed and controlled heat starting from one end and moving along the length of the tube. In Czochralski pulled method, a seed crystal is slowly raised out of a pool of melted ingredients, cooling and forming into a crystal as it slowly rises. Crystals formed by these methods can be very large and extremely clean. One of the identifying characteristics of crystals grown by either of these methods is their perfect and consistent clarity. For this reason, they have many industrial applications, particularly for creating lasers. The most popular gemstones grown in this manner are ruby and sapphire of all colors and alexandrites. 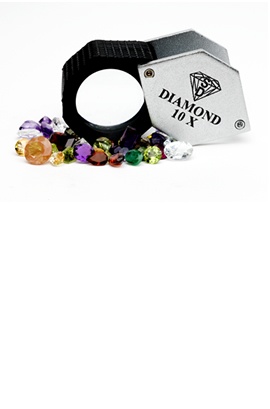