When it comes to describing a gemstone’s appearance, luster refers to how a gem’s surface looks when it reflects light. Gems and minerals exhibit a wide range of lusters, from the reflective metallic luster of polished silver to the entirely non-reflective earthy luster of clay.

Glittering refers to the luster of the gold, or the quality of the light that is reflected from its surface. Raw gold out of the ground typically has a dull luster that barely reflects at all, compared to its bright metallic luster when polished.

Some minerals can exhibit a wide range of lusters, such as malachite. When crystalline, malachite can have a bright adamantine or moderate vitreous luster. When fibrous it can give a silky appearance and massive varieties are usually dull or earthy regarding luster.

The most common luster amongst gemstones is a vitreous luster. This is the luster of most glass and is an easy reference point for determining whether a gem or mineral has a higher or lower luster than vitreous as glass.

Luster can be a handy observational property to identify because gemstones with a high luster typically have high refractive indices, and polished gems with lower lusters usually, but not always, have lower refractive indices.

The following qualities of luster are typically considered to be lower or of a less reflective quality than glass: 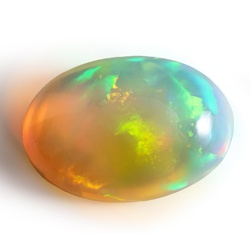