Have you ever seen a vivid blue diamond, or possibly a radiant pink sapphire? The color in a fine gemstone can be amazing, yet most people are unable to explain why we see these rich, vibrant hues. In effect, what we perceive is the total effect of the residual light from the object we are viewing.

Our perception of color is due in part to three basic factors: the object itself, the type of light in which the object is viewed, and, most importantly, our eyes. Not all eyes are equal to the task and color acuity can vary considerably from person to person.

Most individuals know that light is composed of all the colors of the rainbow, as evidenced by nature's spectacular display after a rainstorm. Our eye is the real key to this phenomenon. In an individual with normal sight, there is a series of rod- and cone-like structures spread out over a light sensitive membrane called the retina. Of the two, the cones determine our visual acuity and sensitivity to color. It is believed that there are three varieties of cones, each sensitive to a different range of the total white light spectrum. In the case of color blindness, one or more of these receptors is either defective or nonfunctional.

I mentioned that what we perceive is the residual light. In a simple case like a piece of red glass, nearly all the blue, green, and yellow rays are absorbed, while the red rays are freely transmitted. Therefore, we see red. Simple, right? With gemstones, there is a much higher level of complexity.

Light hitting a gemstone may be reflected and dispersed internally. In addition, some wavelengths of white light may interact with the atomic structure of the stone, changing its state and altering what is absorbed and emitted. Sometimes inclusions may interfere with the light entering the gem and cause it to become scattered or diffracted. In many stones, a combination of factors may be responsible for what we ultimately perceive.

So the next time you see a vibrant, colored gem, marvel at nature's amazing gift to the human race. Its beauty is more than skin deep and considerably more complex. 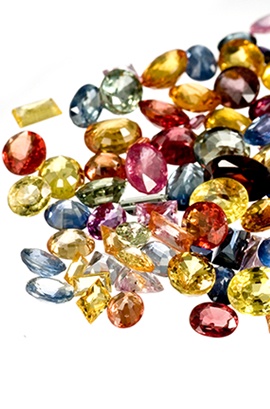