Gemstone collecting is one of JTV's favorite pastimes. During my years working in the gem industry, I have received a lot of questions about this hobby from both enthusiasts and non-enthusiasts. Common inquiries include: Why do people collect gems? How do I get started? And… what should I collect? This article will focus on the first question: Why do people collect gemstones?

Well, first and foremost, gemstones are the original collectible. What do I mean by this? Think back to the ancient civilizations of Egypt. Artifacts dating from 3100 BC show us a society that treasured gemstones. Pharaohs and queens wore elaborately adorned pieces, such as bracelets and headdresses. They also carried loose stones because gems were believed to give one attributes like courage and luck. Historians say their fascination is apparent. In fact, ancient Egyptians had such affection for these gifts from Mother Nature that most were buried with their collection of prized possessions. I've tried to imagine what these primitive humans must have thought when gazing upon a fantastic emerald or topaz. Without all the visual stimulation we receive today, that must have been quite a sight for them to behold. What's really so intriguing about gemstones, though, is that the allure for humans has remained through the ages. Mankind, then and now, has had the desire to own and collect them. Why else would one collect gemstones? Like acquiring any other forms of art, gems should be purchased for their beauty, for their specialness and for the enjoyment they bring an owner. To some, they may bring back a special childhood memory or feeling. To others, gems may be attractive out of a pure appreciation for their aesthetic beauty. Whatever it is, one should collect them out of passion and interest. Its really as simple as that!

Take a look at other positive insights on gem collecting:

1. It does not require a lot of space. Unlike housing a collection of antique toys or teapots, gemstones demand relatively little space. Many people keep them in gem jars, trays and small display cases, which can be neatly stacked and put away. As a collection grows, one may want to buy a larger case or a safe, but these are fairly diminutive in size, as well.

2. One can own a piece of history. Natural gemstones take an enormous amount of time to form. Varieties that have grown from mineral crystals, the most common type, cultivate within the earths crust for thousands of years. These beauties are eventually brought to the surface through volcanic explosions or mankinds mining techniques. When you think about the whole process, isn't it amazing to think that you can own something so historic and old?

3. Gems are not just viable for the wealthy collector. We all know gems can cost in the thousands and millions. However, that doesnt make the lower priced ones any less collectible. Not everyone can afford a museum-worthy collection… myself included. The reality is a lot of fabulous material is available at very attainable prices. If you can't own the nine-carat emerald, look at buying the one-carat. Also, do your research. There are many exotic gems that sell below what their true values are. This is primarily because they never reached main stream popularity or jewelry stores in the mall won't sell them. A good example is red spinel, a gorgeous variety that is as nearly hard and has a similar refractive index to ruby. However, a sizable red spinel will sell for a fraction of a rubys cost. 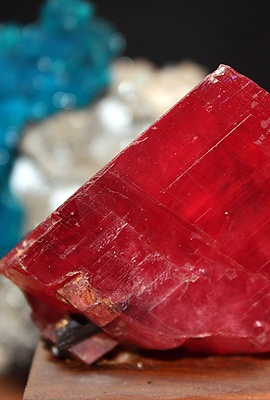