Gemstone Beauty: The Science Behind the Sparkle and Shine

What makes a gemstone come to life? Or as my friend used to say, be "pretty"?

A number of factors will have some effect on the overall appearance of a gemstone, either negatively or positively. For the sake of space and time, I will talk about only five concepts that should be understood when discussing gemstones: luster, brilliance, dispersion, refraction, and scintillation. Each of these attributes will impact how "pretty" a gemstone is.

In simple terms, luster is the flash of white light that you see reflecting off the surface of a gemstone. When light makes contact with the myriad facets of a finished gemstone, each surface acts like a miniature mirror, bouncing the light back at the same angle. If you remember your basic science from elementary school, this was referred to as the angle of incidence and the angle of reflection. One angle equals the other. Note that luster in relation to pearls is a slightly different concept.

When that same ray of light hits any surface - a facet, in this case - only a percentage of it is returned to the viewer. The angle at which light intercepts any surface has a bearing on the amount of light that is reflected (or transmitted) through the stone. Some amount of light always penetrates the stone and is "trapped" within for a short period of time. This trapped light literally bounces around the interior until it finally escapes, and it may or may not come out in the same direction. Regardless, the white flashes you perceive inside the gemstone are referred to as brilliance.

Brilliance is only one aspect of the bouncing light. As each subsequent bounce occurs, light makes contact with the interior facets of the gemstone at various angles. When this happens, light is dispersed or separated into reds, oranges, yellows, greens, blues, and violets. These are known as spectral colors, and each one corresponds to a different wavelength of light. The same effect may be commonly seen during or after a rainstorm, when millions of individual raindrops act like small prisms, dispersing colorful light in every direction through rainbows.

However, while dispersion is the scientific principle involved, its visible manifestation is called fire. Fire describes the rainbow-like flashes of color that are seen within any transparent gemstone as light passes through its angled facets. Color unfortunately tends to mask the effect. Stones with higher refractive indices generally have higher dispersion, which brings us to the next optical characteristic: refraction.

Refraction occurs when light hits any medium that is denser or lighter than air. You may have noticed this principle in action if you've ever dipped a stick into a creek or pond. The stick would appear to be broken, the two pieces not touching where the stick breaks the surface of the water.

A medium, such as a gemstone, is denser than air. As light makes contact with the surfaces of the stone and passes through, its speed is slowed and its direction changed. The first thing an observer will notice is the doubling of the facet junctions inside a fashioned stone.

Another important aspect of this property applies to stones that have visible fractures, called feathers. As light is transmitted through a stone and comes into contact with the feather, it passes from a denser medium (the stone) to a lighter medium (commonly air). Since air or other gases occupy the spaces within these fractures, the speed of light and its direction is altered again. This makes the fracture act like a reflecting surface and tends to accentuate its presence within the stone, making it more visible to our eyes.

To overcome this, many gemstones are treated with fillers whose refractive index is very close to that of the respective gemstone. In this way, the light passes through with little or no change in speed or direction, seemingly making the feather disappear.

Scintillation refers to the flashes of light that occur whenever a gemstone, its observer, or the light source are moved. Think of it as luster, brilliance, and fire...in motion. While these principles and characteristics effect how we perceive a gemstone, there are many other factors that may impact its appearance. The style of cutting, finish, clarity, intensity of color, tone, and treatments are just a few of these factors.

So, the next time you admire a beautiful ring or fashioned gem and think to yourself, "what a pretty, pretty stone," you will have a better understanding of how and why that beauty exists. 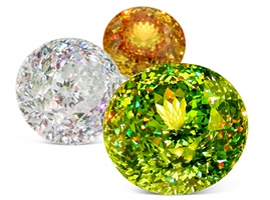