An assembled stone is one that is constructed out of two or more materials. The components may be natural or man-made materials, but most commonly are a combination of both. This category includes creations such as: doublets and triplets , inlays, mabe pearls, and reconstructed gem materials. There are four common reasons why such pieces are made:

Most gem lovers are familiar with doublets and triplets, especially the opal variety. Opal frequently occurs as thin seams of material within a host or matrix rock. Although beautifully colored, some stones are so thin and fragile as to be unsuitable for jewelry. By cementing one of these thin layers to a strong backing (black onyx, opal matrix, or other dark material), two goals can be achieved. The strong backing provides the thickness and strength needed for setting, and the dark color makes the translucent opal layer look like black or darker opal. The color play in the gem material is then enhanced against this dark background. An opal doublet must still be set and worn with care, as the exposed surface is still opal and relatively soft. Further, solvents can attack the bonding layer. Well-done pieces look wonderful, and make affordable, reasonably durable, opal jewelry.

An opal triplet is merely a doublet that has an additional clear layer (usually quartz or glass) on top for added protection. Ammolites are often assembled in this way to protect their fragile nature. In effect, it forms a sort of sandwich. Triplets may contain opal mosaic, synthetic opal, organic material such as leaves and feathers or most any natural or artificial material.

It is not uncommon to see natural materials combined with synthetic materials. A stone with the top layer composed of natural sapphire and the lower part synthetic sapphire will appear the color of the finer synthetic, while exhibiting natural inclusions; these types of doublets have been very convincing imitations to unaware buyers for many years. Gem-colored glasses were commonly fused to a thin garnet slice on top, in order to benefit from the greater hardness of garnet, but that was before we had the ability to produce much better imitation gems. These types of doublets may be glued or fused together. In some cases they are obvious, others are difficult to detect without experience and magnification.

Soudé stones are a type of assembled gem that can imitate most any transparent gem material. They are a type of triplet with a top and bottom layer bonded together with a transparent, colored, bonding layer. The colored bonding agent is considered the third component. They are most commonly green to imitate emerald, and may contain a light to colorless beryl (the mineral group for emerald) layer on top to fool some tests. Today's Soudé stones are most commonly two layers of colorless synthetic spinel with a green bonding layer, but they can be any color.

Some of our new quartz triplets are composed of natural quartz (for hardness) top and bottom layers, and contain a decorative layer of various designs that creates an entirely new look in gemstones. Quartz or moonstone tops can also be seen on top of various gem materials turquoise, lapis, black onyx, etc. For added drama, rutilated quartz may be used or metallic or other color effects can be added in the bonding layer. The possibilities are endless. While some may resemble natural materials, most are created for fun, fashionable, and affordable looks.

Mabe pearls are a type of assembled cultured pearl. Rather than forming as a loose pearl, they form as a blister on the inside of a pearl mollusk shell. The blister dome is cut away from the shell, the hollow area is filled and then a plain mother of pearl backing is applied to the bottom. In some cases, two mabe pearls may be attached back to back, giving the appearance of a single pearl. There is always a visible seam with mabe pearls, and care must be taken not to weaken the bond.

When small, thin pieces of gem materials such as opal or shell are set into recesses within metal, the term inlay is used. Inlay opal generally uses smaller pieces of opal that are set with a black bonding agent to appear like black opal. They are, in effect, much like a doublet, with the jewelry itself becoming the backing. Inlay illustrates reasons #1, #2 and #3 for making assembled stones in that they allow use of small or thin pieces, which might otherwise be unsuitable for jewelry, lighter colored opal imitates the rarer black opal, and the natural play of color is enhanced. 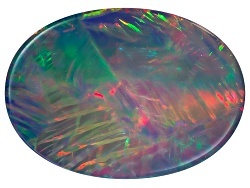 Reconstructed or reconstituted materials are those that are composed of smaller pieces of natural gem materials that are bonded together. The best-known reconstructed material is turquoise, but many materials can be similarly treated, including coral, marble and quartz. Small pieces of natural material that might otherwise be discarded are packed together and bonded with a strong bonding agent to match their natural color. In some cases, dye may be added to the pieces themselves or to the bonding agent. Another method of producing reconstructed gem materials involves heat. A good example is pressed amber. Numerous smaller pieces are heated close to the melting point and pressed together forming a single larger piece. With amber, due to its unique properties, no bonding material or added ingredients are required. Reconstructed materials offer an affordable alternative to natural, single-piece gems.

Hybrid and certain composite materials, such as lead glass filled ruby, may seem to fall under the category of assembled; but while these materials may seem similar, they are not considered to be assembled gems. They are actually a newer generation of treatment in which the join between the various components is not visible and the line between natural and man-made is not as well defined.

The care and wearing recommendations for assembled stones vary with the materials involved and method of assembly, but certainly ultrasonic and steam cleaning should be avoided. Anything that might attack or weaken the bonding or otherwise compromise the integrity of the piece is to be avoided, including high temperatures. It would also be prudent to have such stones removed, when jewelry containing them is repaired or sized. In general, erring on the side of caution is wise. 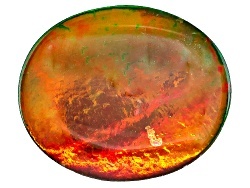