If you enjoy the rich color of green in its various shades, there are many stones to choose from. There are emeralds, of course--beautiful, but expensive. Then there are gemstones such as chrome tourmaline and tsavorite; both eye catching but difficult to find in jewelry stores and somewhat expensive in larger sizes.

And then there is the "other green gem"--peridot--a stone whose pedigree can be traced back as far as the early Egyptian civilization. Since gemstone sciences were archaic at best during that period of history, stones were identified by color alone. A few scholars even believe that many of Cleopatra's prized emeralds may have been peridots in disguise.

Regardless, peridot has a long and distinguished history. Peridots have been admired and prized by monarchs and clergy alike. They have been used as talismans to ward off evil as well as for adornment, finding their way into pendants, rings, crowns, scepters, and even dagger handles. Some of the largest and finest peridots may still be found in the cathedrals of Europe, although many were thought to be emeralds until the advent of gemology as a science.

What makes this gemstone so sought after? First and foremost is its color, a rich yellowish green. Striking by day, it literally becomes mesmerizing at night, earning it the nickname the "evening emerald." And unlike many other gemstones, peridot is not treated or enhanced in any way. It is also the only gemstone that has been fashioned from extraterrestrial sources, pallasite meteorites! Bright, clean peridot--just as Mother Nature created it--is available and affordable.

Peridot also has the distinction of being the birthstone for August, yet its fame extends further. Peridot is also the gemstone representing Libra, a sign of the Zodiac. And while each planet has its own gemstone, peridot represents the sun, the most important member of our solar system.

Whether you are a gemstone collector or a jewelry enthusiast, Jewelry Television® has a wide range of peridot in sizes and shapes to satisfy your tastes or needs. Mother Nature's creation has never been more affordable or more available. 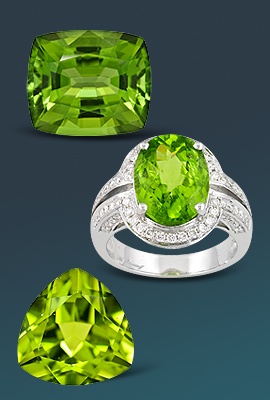