Thanks for being a part of our JTV family. Click here for a special update from our CEO regarding COVID-19
Skip To Content

One of Earth's most highly prized treasures, diamonds--the traditional birthstone for April--have an extensive history that dates back thousands of years. Yet while mankind has known about diamonds for what seems like a substantial amount of time, consider that many diamonds were formed billions of years before that. Yes, billions!

Diamonds were formed deep within the planet, approximately 90 to 120 miles below the surface, at temperatures and pressure difficult even to imagine. However, man would never have had the opportunity to behold one of these amazing creations had nature not taken additional steps. It had to forge pathways to the surface to bring this rich treasure into the realm of man. These pathways, occurring over hundreds of millions of years, are called volcanic pipes.

Somewhat carrot-shaped in cross section, these volcanic conduits traveled upward through points of weakness in Earth's mantle. Under great pressure, many of these pipes broke free of the surface and formed calderas, the wide circular or conical openings at the top of volcanoes. Others never made it to the surface and had to rely on nature's relentless attacks to expose their exotic cargoes.

Over millions of years, through different forms of weathering, the diamond-bearing material, called kimberlite or lamproite, was eroded and carried away. The transport of these materials formed alluvial, littoral, and marine sources, or what geologists refer to as secondary deposits. Secondary deposits were the first to be worked by ancient cultures, and offered two very attractive features. The first was a concentration of easily accessible rough, providing a greater reward for the amount of labor involved. The second was finer clarity.

During the rigors of transport, most of the more heavily included material broke apart, leaving the cleaner, more durable pieces of rough as a testament to nature's handiwork. As a matter of fact, marine deposits (offshore) have some of the finest quality diamonds. That's due to millions of years of wave action, which has destroyed the weaker, less durable included stones.

Although there are thousands of kimberlitic and lamproitic pipes, only about 15 percent contain diamonds. And of that 15 percent, only about 5 to 6 percent are commercially viable. That breaks down to about two dozen working mines to provide the world's needs.

Also consider that although a mine produces diamonds, that does not mean all the material is usable for the jewelry industry. Most of the world's diamond production (by volume) is suitable only for industrial purposes. An extremely small percentage of the world's supply is clean, colorless to near-colorless goods.

So, if you were an April baby, you belong to an exclusive group of individuals who have a rare, exotic, and beautiful birthstone that deserves the title King of Gemstones.

While many diamonds are cut and sold as nature formed them, there are new and exciting treatments that can permanently alter the color of nature's handiwork, providing blue to blue-green diamonds as well as yellows and a host of other choices, if you prefer something with a little color. These treatments improve on Mother Nature's efforts and provide a rich palette that is sure to please even the most demanding eye.

If you would like an alternative to diamond for an April birthstone, you may wish to consider white zircon, white sapphire or rock crystal quartz. Offering excellent fire and brilliance, zircon is as affordable as it is beautiful. When diamond-cut, zircon is amazing to behold. Zircon is a natural gemstone, not to be confused with synthetic cubic zirconia. White sapphire is also an excellent choice that is highly prized. 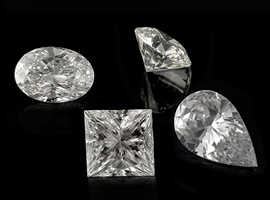